The Vocaloid idol; singing at the top of his powerful voice. From the Character Vocal Series comes two 1/8 scale PVC figures of the twin Vocaloids, Rin and Len Kagamine! Sculpted by the popular sculptor Kanji Toona, this energetic figure of Len was created to be an image of her him performing for his fans on stage. His face looks as if it's about to burst into song, and his keyboard has had the finest details added to its design. If you display him together with Rin (each sold separately), you can recreate a lively scene straight from the twin's concert. 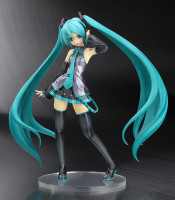